I was born in a small suburb outside of Toronto called Ajax. It was back in the day when kids could go out into the streets all day with little or no adult supervision, and after a long day of tearing around the neighbourhood, we would end up safely home in time for dinner. As the town grew and became more populated, my parents felt the draw to the country. We moved out of this small town and I grew up in an even smaller one, surrounded by nature and farms.
At Lockhart Public School, one of the things we were were schooled on that I learned about and retained some vague knowledge of, was dinosaurs. We were taught about extinction caused by dramatic world events known as Natural Disasters. Meteors, Ice Ages, Flash Floods, Volcanos... pretty much anything could happen to us at any given time to wipe us all out, we were told - but not to worry - because it would all be over before we knew it, and in the blink of an eye - if that ever happened during our lifetime. Still, these doubtful inklings would creep in just before dozing off to sleep... what if?
The brainwashing continued when they petitioned for, built and activated Nuclear Reactors on the very big & beautiful, Lake Ontario. Don't worry, it's perfectly safe. They stated. No chance of an accident or they wouldn't build it in the first place, our parents convinced themselves, and us. One minute they were teaching us how to hide under our desks and where to go in the event of a Nuclear Disaster, the next minute they were telling us it was impossible and to just continue to carry on living our day to day lives. 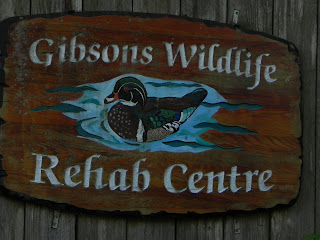 I thought it was pretty great, we saw a female getting fed, and moments later, her brother appeared for his gullet to be filled. His red cheeks just filling in against his light grey head.
He peeked his head out and shouted at his mom to bring him more food. A mother mule deer walked right behind me escorting her two spotty backed baby fawns. She startled when she saw me, but didn't run into the traffic, she carefully guided her babies to safety behind the tree line next to the chain link fence that surrounded a hydro station.
I know that even though four of those little Northern Flickers we brought in didn't make it back to nature, they died with full bellies, safe and warm and cared for. They didn't merely starve to death in the cavity of the birch over a period of time that would have been cold and lonely and a stark contrast to the love and care they got right up to the end. Intention takes a back seat to nature's master plan and that's the way it should be. That's why we need to stop doing things that go against nature. Like mining coal.
It's Sunday June 26th, 2011. CLICK here to: STOP A COAL MINE!
Posted by Firedog at 12:15 AM