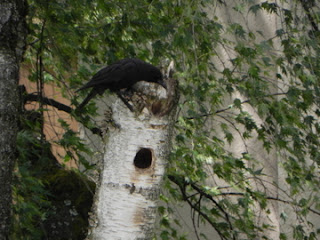 The beautiful Northern Flickers have finally begun to hatch from their eggs! It started to happen yesterday I think. Yesterday that crow in the above picture was all of a sudden in the birch tree squawking at the Flickers and into their hole. They don't usually pay any attention to it. They are usually higher in the tree and not near the cavity nest. they tried to get in ages ago and know they can't so they don't bother. I chased them away because they started to bug the female Flicker when she was flying around telling the other Flickers it was time! But the crows were the first sign something was up in the nest... at least for me. I guess the crow heard the babies chirping or something.
I do sit at my window all day and watch the nest, because it's there... and I work on my computer a lot these days so I look away every few minutes to rest my brain and eyes and there they are, doing stuff that they do.
Then the feedings started. In and out of the nest all day, both parents. And they are tending to several nests. Today I saw the two females together so they are co-parenting!
There is still almost always someone on the nest, except sometimes the male will leave the babies unattended to get more food if one of the females hasn't returned yet. She never leaves if he's not back, but she will go down onto the lawn or to our suet paddle where she can keep an eye on the nest at all times.
This is what it looks like when they go inside the nest:

I can't believe I got that shot of the flicker landing on the nest with his wings all outstretched. I have tried to duplicate it a few times, but haven't got it yet. They are moving so differently now, hurrying everywhere. They are now darting in and out of the nest so that other birds don't see where they came from. They were sitting inside the cavity for about 2 weeks, maybe a day or two longer. Someone always sitting on the eggs. Before that they were dancing and mating all over the tree.
Now it's all covert and they really don't want to be watched so I am being very discreet, although they know I am here watching. I protect them from the crows and leave food so there is a distant respect for me and they aren't really that afraid when I take photos from a distance.
According to the experts there won't be any sign of the babies for another two weeks. Apparently they stay inside the cavity until they fledge. I guess this is their idea for survival for this Flicker family. An ornithologist gave me a survival statistic for this beautiful bird. It is apparently not a high survival rate at all. I don't even want to type/say the numerical percentage she quoted, because I don't want to make it so for this family. They will work hard, we will keep the crows away from the babies.
Posted by Firedog at 10:35 PM