Friday was now history, and Saturday sunrise was met without the chirping of the Northern Flicker family of West Eleventh Avenue. We had a few things to organize before the trip to West Vancouver, and then across on a ferry to the sunshine coast to the Gibson's Wildlife Rescue Centre. We wanted to walk the dogs early so they would be comfortable for the trip. I loaded them into the car and walked around to the driver's side. There were some feathers swirling around on the grass beside the alley next to the parking spot. Feathers I missed when i gathered Mrs. Flicker from the alley. I picked them up now...
A small detail that comes only from a sort of intimate study of a Northern Flicker, like when they aren't alive anymore. I felt like I was let in on a kind of secret. The spotted chest or Mrs. Flicker isn't polka dots at all. Blowing across the grass near where I found her body were tiny cream coloured feathers, each one with a little black heart where I had expected to see a polka dot. I was glad to know it and sadder for knowing it at the same time. Somehow it made me even more determined to save these little nestlings from the unrelenting city.
And- can I just say, that I understand that sometimes animals are struck by cars and it is completely unavoidable-save for never driving a car- but this rare woodpecker, with 8 babies, was hit in a back alley next to a curb. If the driver were paying attention, not speeding carelessly, Mrs. Flicker would still be with her offspring. The nestlings wouldn't be in a cage in a Vet clinic on West Broadway waiting for us to drive them a hundred miles away to give them a fighting chance at survival. 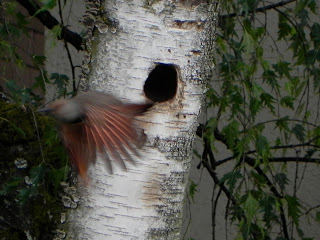 And to the advice of those who don't think that people should interfere with nature that quickly or drastically, downtown Vancouver isn't nature. A city park, isn't nature - it's landscaping. Nature is where people don't come first, or second or even third. There are ways we can help nature succeed to include us so we can evolve with it, but it means Everyone putting effort towards controlling corporations and governments to force them into behaving the way we expect them to, and by NOT PUTTING PROFIT FIRST ANYMORE. If you are confused, or not convinced, go see a Michael Moore documentary, or watch The Corporation, check out the David Suzuki Foundation, talk to Leonardo Dicaprio or Ed Begley Jr. if you don't feel like figuring it out for yourself.
And folks, you can't expect a bunch of famous people to sing a song or hold a benefit and fix things. Each person has to make a little effort. Okay, no more lecture. I am just saying... wake UP, look  around. Slow DOWN notice things. Pay attention to your surroundings... do SOMETHING!
Now, back to the Flickers...
We went to the Night Owl Bird Hospital and collected 6 baby Northern Flickers to deliver to GWRC. 2 of the nestlings did not survive the night. It seems that Mrs. Flicker was already having a hard time keeping up with all the babies as it was. 4 were really healthy, 2 noticeably smaller ones would require a little more attention but were doing really well, but the two that perished were an indication that she was just barely keeping up. The doctor mentioned she was surprised she even had enough food to feed all these little ones. Eliza mentioned our suet paddles and Dr. MacDonald thought that could have been what was keeping everyone alive.
Night Owl had fed and readied the babies for the journey, so we didn't even have to lift the towel that covered their cages until we presented them to GWRC. The trip and ferry ride were uneventful and pleasant. The babies made weird noises that perked our dogs ears the entire ride...The kind folks who run GWRC were excited to have this cheeky species back in their folds, they had raised two before and successfully released them in back into nature. We were lucky to have rescued them so fast that they didn't really suffer a great deal of trauma. They didn't really need to recover from anything or be nursed back to health, they were lively and alert and HUNGRY!
Immediately expert hands of the lady of the house went into action. She had each bird fed in mere moments, using a plastic coffee stirrer, and a special formula developed by the Ornithological Society of America.
Because the babies are eager to eat and open up for feedings, they won't require too much handling and won't become too trusting of humans. This makes their chances of survival so much higher. Being wary of people makes them nest further from poisons, urban encroachment, cats and of course, traffic.
We got the grand tour of the Rehab Centre. It's just a wonderful place operating out of the goodness of these people's hearts. Please donate generously through their website if you can contribute to the caring of some really wonderful creatures, including the Flickers!

In my neighbourhood we would learn to adjust to the amputated Birch across the street, and now that  the nestling Northern Flickers are in the right hands, they will live and be released back into nature! With any luck there is something in them that migrates them back to Gibson's or somewhere else safe on the Sunshine Coast, and not back here into downtown chaos.
I talk to GWRC every day. Progress is the only thing to report! the runt is the boldest, demanding food first, and last - most are perching on the lip of the cage and waiting to be fed, the other 2 are on a cloth still a little small to perch on their own. But no one needs to have their beak pried apart & held open for feeding! They are all eager eaters and that makes them even more likely to survive to adulthood! We are going to visit them tomorrow.