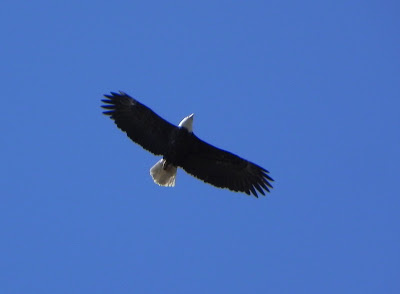 If you live in BC and ever bother to look up, or if you're like me and spend most of your time staring at the sky, chances are you will see a Bald Eagle. I have often seen them circle overhead, traveling or hunting. Going from Burnaby Mountain to Deep Cove without ever flapping a wing, just riding the wind current across the water, or across the city. 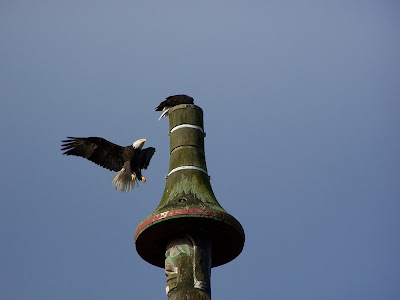 That in itself is a wonderful thing, considering that this bird was once on the endangered species list. For now, here in Vancouver we still have quite a few large trees to deal with this kind of traffic, but with urban infringement we lose more and more habitat for not only an eagle's nest, but for all the birds and animals that live in that habitat.
In the Port of North Vancouver, there was a big old place that TV shows and feature films used to film in because it was abandoned, so you could work into the wee hours without disturbing residentials. It was called Versatile Shipyards. It's all expensive condos now, but just a few years ago it was these huge abandoned shipyards, covered with tons of corrugated aluminum, and built out of old growth douglas fir. Beams two and a half feet wide and forty feet long... hundreds of them. This place stood on some glorious old wilderness that once made ideal breeding grounds for these Eagles. 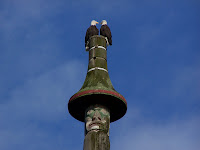 One morning at 5 AM, while working on a Disney movie at the time, I had reason to find myself down at these really old shipyards, and standing out on the end of a sixty foot pier. I had been standing there for about fifteen minutes, watching the sun come up to my left, and listening to the water lap against the struts. I happened to look to my right, I guess for the first time, because standing beside me about six feet away, was the biggest prehistoric creature I had ever seen. It came up to just under my shoulder in height and it's body was twice the size of my dog's. It looked at me with his giant yellow eye and slowly opened his wings, which hung off of huge muscular shoulders. I realized it was a Bald Eagle - about the size of a seven year old child. He held his arms out for a second, standing still looking at me, like, 'watch this'. Then at the same time he slowly looked away, he just tipped forward and dropped off the end of the pier.
His body arced back and his wings reached out sharp on either side of his huge brown body, his huge feet stretched tight against his powerful white tail.
The drop was about ten feet to the water, in that short distance he caught enough air to glide across and then up, higher and higher. He flapped his wings only a few times to gain more lift, and was within moments high above me, and halfway across the inlet. I was awestruck. Looking up in the sky you think they look big, but there's no real scale to judge. Seeing an giant old one standing just a few feet away was just something profound. I realized that he was there the whole time, and was just so big, he didn't register in my head, so I didn't even see him-
I have always meant to go to Brackendale, near Squamish, BC in the early spring. They do a Bald Eagle count there every year because it's the place where the salmon spawn and Eagles nest and breed. Next year for sure.
The other day we went to Deep Cove. we saw a Bald Eagle flying overhead with something white & rather large. We hoped it was just a Seagull, and not a cat or dog. There were crows chasing it relentlessly, but the Eagle just flew, low above the trees and disappeared from our view. When we got to the beach, we saw 3 more Eagles hunting. I took some video of the ruckus the crows can cause when one of the Eagles decides to land on a familiar roost. See video, below...
We keep our pug on a leash whenever there is an Eagle sighting. They have been known to grab small dogs right out from under their unsuspecting owner's nose. We had always hoped this was just an urban myth, but time and time again we hear first hand accounts. No one ever blames the Eagles, they are just hunting. Loss of food and habitat makes wild animals look elsewhere for survival. Lots of birds and animals adapt to our sloppy ways only as a last resort, they don't want to be domestic - they have no other choice. Apparently this year there are practically no salmon. None for the fishermen, none for the Eagles. And now, with dear Japan's compromised reactors relentlessly weeping nuclear devastation into the Pacific Rim, we have no idea what next year, or century for that matter- will hold.
There are several Bald Eagle Cams you can watch online. They are smart enough to NOT publish the actual physical location of these nests, so that thousands of folks don't show up to see it, but there are hundreds of Eagle nests all over the lower mainland and on the islands. If you have the dream to see a nest with your own eyes, it's possible with out even leaving the city. They are profoundly huge. Like the size of a VW beetle, suspended ninety feet above in the top of a giant fir, usually.
Posted by Firedog at 7:42 PM