A visit to Reifle Bird Sanctuary 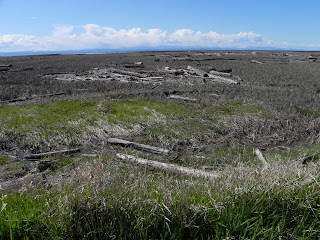 Located near the precious Burns Bog in Delta BC is a very special place for birds of all species. In the heart of the Fraser River Estuary, The Reifle Bird Sanctuary provides shelter for some of the most spectacular birds our planet has to offer. Jill and I went on the spur of the moment back in December. About a 20 minute drive straight up Oak street and out of the city to Delta, and we were there. We walked around through the ponds with our cameras and a dollar bag of duck food. The mallards greeted us immediately begging for a taste. They glowed in the sunshine. 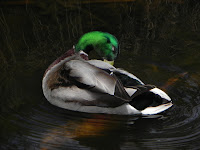 This first day we went there were some rare Night Herons roosting on a tree in the sun. Three of them the colour of Kingfishers and the size of the mallards, really small when I am used to seeing the Great Grey Heron or the Blue. We wound around the estuaries and were awed by the beautiful natural flow of the place. There is water on both sides of the path and no matter where you look, some bird is busy doing something. 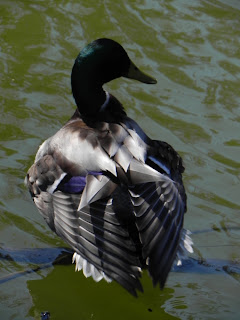 We came around one corner and saw something that looked prehistoric - Sandhill Cranes - 3 of them! They stood about 5 feet tall. They were a little intimidating and wanted the corn we had left. The male was a little threatening but I wasn't thinking he was going to attack us or anything - Jill was totally terrified that he would. He would sort of block us from passing until we dumped a pile of food for his wife and daughter. A bit of a challenge for the food, it was only fare - it's their turf and we wanted to take pictures... 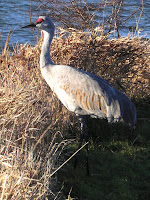 There are a few families of these cranes the further we walked. Each time the male would demand some food so we could pass. They were by no means tame - but seemed to know that we would have something for them. 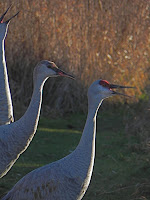 On the very west side of the sanctuary, we could hear a really loud disturbance in the distance. Snow Cranes, thousands of them, preparing to roost for the night. They were spread across the horizon like a lace table cloth blowing on a clothesline, swaying back and forth together honking and flapping. The ruckus was so fantastic that the male Sandhill Crane standing beside me, stood there watching with worried fascination the whole time - totally as amazed at this as I was, like he'd never seen it before either. I wished I was closer than the 2 kms away that I was. It looked spectacular even from that distance. 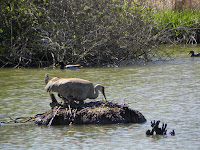 I mentioned earlier that we decided to go to this sanctuary on the spur of the moment, and also say for the record that I am an amateur photographer... so it is here, just after the Snow Goose display on the west side of the bird sanctuary, at the peak of golden hour, that I run out of battery life for my camera.
The next time we went, was also last minute, but I had a charged battery. The song birds were just returning to nest. Tree swallows and Jenny Wrens sang and darted over the water. The Sandhill cranes are now sitting on eggs in the midst of the water far from the coyotes and the humans. Bald Eagles circled constantly overhead. And tons of different ducks waddled everywhere, bobbing heads and courting their ladies.
The first time I went to Mr. Spark's cottage in Fenelon Falls I saw his father in-law's decoy collection. They asked me my impression. I thought it was oddly interesting. I didn't really approve of them, so you lure ducks to land with these and then shoot the ones that are alive? Gross. I hated hunting. Most of the decoys were plain and brown I guess the idea being that a female would attract more males... so then they show me one from the top shelf. It's all crazy painted, like a clown. Tons of colour and stripes and spots. Was that one my favorite one they asked? I thought it looked a little too over done, I remember saying and the room filled with laughter. I had no idea until years later that it was a male Wood Duck. When I discovered that that was a REAL duck, I knew I just had to see one in real life. Thirty-five years later at this Reifle Bird Sanctuary, I saw my first one! 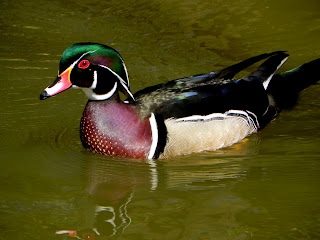 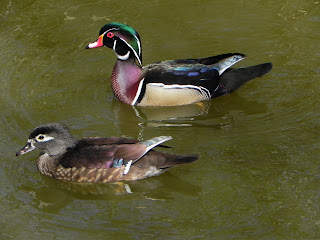 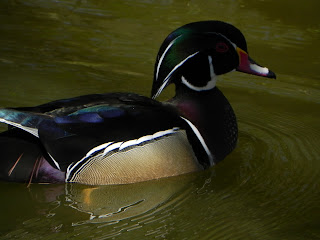 After taking these pictures, I did a little research. I love how everything in nature has it's own little bit of detail that distinguishes it from all others. This unique looking duck has claws so it can nest in the cavities of trees!
This wonderful place is somewhere I will return to often. I highly recommend it for anyone who enjoys nature...
Posted by Firedog at 9:42 AM