Mail Strike tomorrow? Can I get mine via Owl, instead? 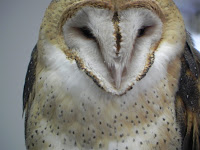 When I was little and we lived in a small town called Ajax, my sister joined Brownies, and my mom became a Snowy Owl. I was too young to join, but played in the back of the gym while the group met. I loved that my mom was a Snowy Owl. In my mind this meant she actually was and would at some point transform into one when the time was right. My mama used to tell me grand stories about the forest where she grew up when her papa worked in the lumber camp near Burks Falls. There was magic in them and she knew about it, so it was no surprise to me that she would achieve owl status. I was under the impression that all I had to do was turn 7 and I would witness this secret transformation.
We moved from Ajax to the country just as I was about to turn legal Brownie joining age. Which came as a bit of a relief, because although I likes the little belt with all the leather pouches, and the sash and shirt with the crests of achievement, I really was not into wearing the leotard and the skirt. I was more of a jean jacket/jeans girl and still am. 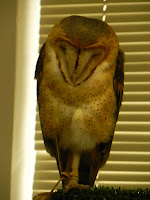 There's a place in Delta near the Reifle Bird Sanctuary that takes in wounded birds of prey. Aptly named O.W.L., (Orphaned Wildlife Rehabilitation Society) is such a cool place because they save these specific animals, and you can go there and look at some of the birds that were too wounded to be released back into the wild. 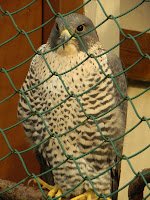 I am lucky enough to know a wonderful person named Bri Fudge. She is a living Saint to Animals. She posted photos on her Facebook wall from one of the places where she's a volunteer/animal advocate. These pictures she posted of her volunteer work at O.W.L. got me an inside look at a really cool place. I was blown away. A few weeks later she took us & a few of her other friends, on a tour of this wonderful magical place that is in dire need of funding. As soon as you walk into the main office you are greeted by Sarah, the absolutely incredible looking Barn Owl. She is stunning. It's hard to take your eyes off of this beauty, and you wonder how you have gone a whole lifetime without making a point to see one in real life before.
Outside there are a few giant cages that house a few lucky birds that now have a new way of life other than the one they were born into. Most of these birds were hit by cars and brought in by folks that stopped to see what was lying in the road, so they are lucky to be alive. Others hit windows or get caught in extreme weather. Sometimes the Eagles come in with their talons locked together. The priority is to release the wounded birds, but sometimes, it's just not possible if the bird is to survive. 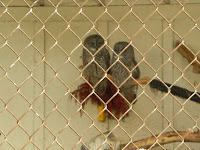 Two residents are a pair of Great Grey Owls that live in a cage together. Samson & Delilah are so beautiful and totally owl shaped owls. They were hard to get a good photo of because they were hanging out in the back of the cage on this cold January day. I asked Bri if she goes into that cage and she said only when she has to. These two owls have dedicated their lives to caring for ANY baby bird brought into the society. They are very loving and know just how to rear a baby that can be released into the wild. This ability causes them to be extra protective of their space, and they have been known to attack if you enter their cage. I say those scars are a badge of dedication to be worn with honour. 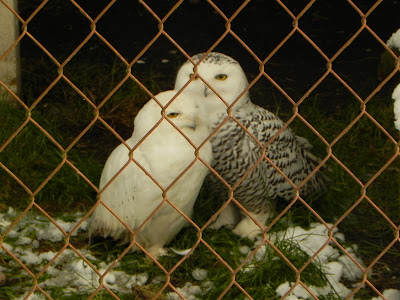 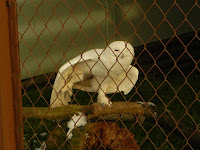 I asked all sorts of questions, like the hard one - they are birds of prey, do they get fed live stuff? The answer is yes they do. And the things they are fed are raised just for these birds. They are raised without medication, and live happy healthy lives until they are fed to the birds. They collect toilet paper rolls and stuff to put in the mouse cages so they have a nice life, before they have what the Buddhists would refer to as- a Sky burial... even though these wonderful birds in particular can't get to the sky I like to believe it still counts. 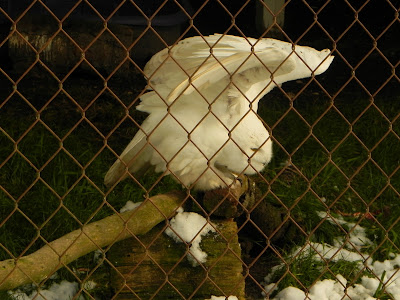 This pretty female Snowy Owl wanted to show me how stunning she looks with her wings all flexed up so when I was alone at her cage taking a few pictures, she posed for a nice shot. I had no idea that these birds burrow on the ground. All this time I have been wandering the forests looking for owls, and many of them spend a of of time on the forest floor! 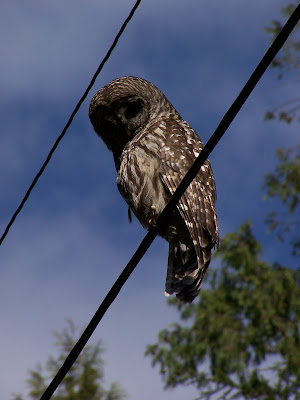 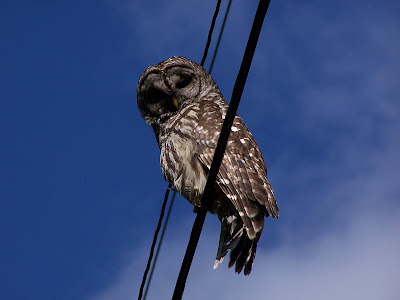 I was working on a wonderful little island called Bowen, and returning from the landscape center around 5PM when I saw a Barred Owl on a Hydro wire. I stopped the car on the side of the road, jumped out, and took a few shots. I was standing right under him snapping away. He was eyeing something rustling in the grass about a foot from my boot. I left before I bothered him too much. I was so stoked to see him. I look for him each time I round that corner, but have not seen him since.
Posted by Firedog at 3:18 PM