I did not know that.

When I was a kid my mom's mom lived with us from the time I was about three. Both of my parents worked full time jobs, so she was our guardian for most of the day during the week. One of the things I loved about her was that she loved watching TV. Carol Burnette was a favorite, and we used to think that we had a special bond with Carol, because as everybody who cares to know knows, Carol had a special relationship with her Grandma, Nanna I think she referred to her, and the whole ear tug at the end of the show was a holla! to her Nanna. So basically I was taught that TV was an example of good things and kindness and not much good for anything else.
I feel like I learned a lot of my compassion for animals from Johnny Carson, for example. I remember practically every animal Jim Hanson from the San Diego Zoo brought onto the show, and the little monkey that peed on his head was just one hilarious event that unfolded naturally before us on relatively real TV.
Jim would tell Johnny some obscure fact to which Johnny would respond his sincerest, "I did not know that." Oprah has her Ah-Ha moments- (which sounds annoying when anyone actually uses it besides her, or someone directly talking to her...) but Johnny has his I did not know that moments. I had one yesterday. And so begins today's post. Dedicated to Judy, leading us to a tradition in Stanley Park that I never knew about... 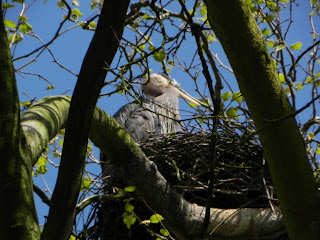 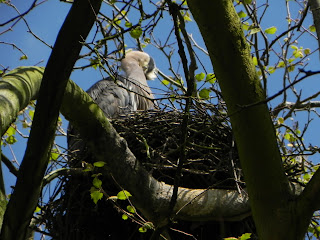 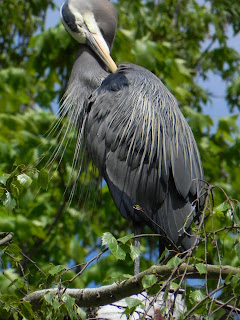 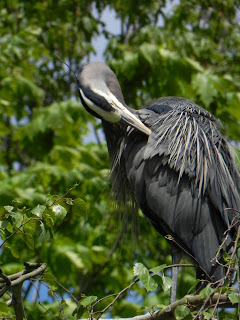 Judy, Eliza's mom came to visit last week and said she had been reading my posts on this blog and enjoying them. I think I had 2 at the time... A friend had mentioned that she should try to go see the Herons nesting across from the Sylvia Hotel in English Bay. Well one thing led to another and we didn't make it. Eliza and I both felt badly for not getting there with Judy, but made a point to get to it soon.
We decided to go yesterday afternoon, and I did a quick google search to see if anyone had mentioned anything about it so we didn't have to drive around looking for the area all day. Here's where my - i did not know that -moment happened-
Great Blue Herons have been nesting in Stanley Park in the exact same location, FOREVER. More than a hundred nests - together in one giant colony - high up, in TREES. If you don't look up, if you don't catch the yearly news coverage - you, like me have no idea this sight is even here! I immediately wondered who makes sure no one f#*@$ with them... Do the fireworks scare them out of their nests? Those annoying fireworks that continue to go off constantly in this city like we aren't in the middle of a climate crisis. At least we got rid of the Vancouver Indy. That was a nightmare each and every year for every corner of nature around these parts.
There is much protection surrounding The Great Blue Herons Of Stanley Park. There are also a ton of videos to check out on Youtube, or if you live in the city I suggest you go down there to get the full scale enormity of this Heron Colony.
Apparently they have been nesting there forever. There are MORE THAN 100 nests, all in only about 14 trees or so. In one tree, there were 8 giant nests! Here's the little video we made when we went yesterday. So enjoy the photos! It looks more like a colony of pteryodactoyls nesting, according to my Flinstones field research, but see for yourself.
Oh ya. and if you happen to go down there, and find a cell phone, I lost mine and really need it back! :) 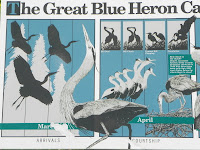 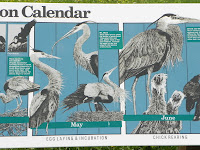 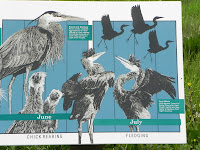 There were a few shells on the ground already, so lots have already hatched. The eggs aren't much bigger than a goose egg, way smaller than an ostrich egg. I set it on a fence post for scale... My photos aren't nearly as good as the ones the Stanley Park Ecological Society have, so go there and take a closer look if you like.
And Happy Sunday! 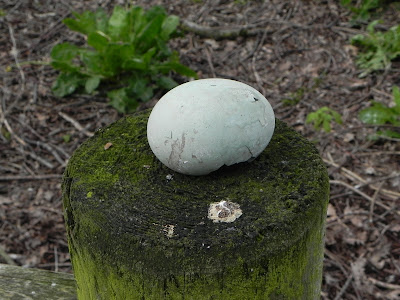 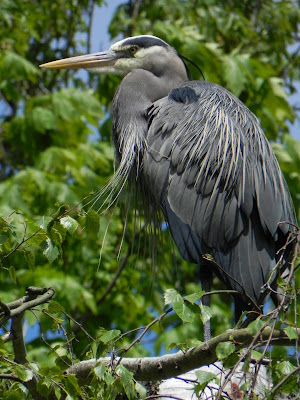 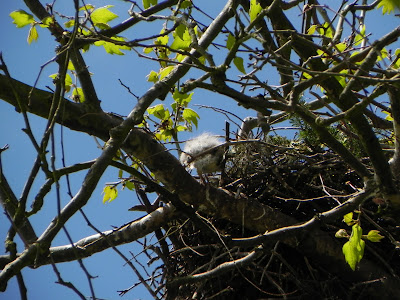 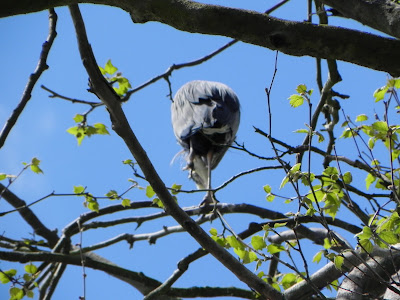