What a palmful of sunflower seeds will get you... 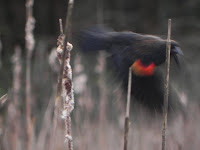 One of the first sights & sounds of spring, is the spectacular and magnificent Red-Winged Blackbird. They are loud, happy and songful. At first glance you might think that the male has all the decor, all the flare and personality... but behind every successful man is a beautiful and more successful woman- in a lot of cases, so they say... 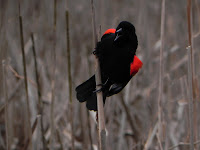 Jill's car stinks like something dead this morning so I drove her to work so I could take it in and clean it for her. We aren't sure what the heck is under the dog blankets in the backseat, but we are going to find out as soon as I post today's story. So starts today, and why we drove to the beach with the dogs in the middle of the week- I had the car. We decided to go to Jerry's Cove and see the birds. Jill left a bag of shelled sunflower seeds in the front seat so we carried those to the pond.
We often attempt to hand feed the Red-Winged Blackbirds, unsuccessfully except for 2 rare moments where Eliza fed a male, and a few months later, I fed a female. We are careful to get the proper food for the birds we feed. We do not feed the ducks bread like I did when I was a kid, apparently it's not good for them. Now we buy duck food or seeds & nuts. I reached into the sunflower bag and grabbed a palmful. I barely had my arm out stretched when the first bird landed... 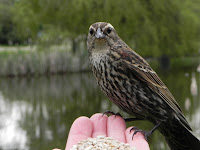 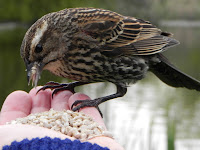 She landed with no hesitation and stuffed her beak full with seeds. A few other females hovered over me waiting for their turn to land. They were very respectful of each other and took turns filling their beaks to the brim before flying off. If you want a closer look at the pictures I post, just click on them and they enlarge... This was the first close-up look at these gals we have ever had! They have a wonderful orange smudge on their shoulders, well some of them do, their markings are so beautiful.
We stood there feeding them for about twenty minutes before walking the dogs around the rest of the park. 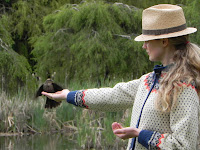 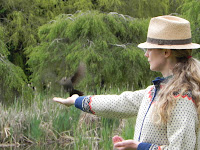 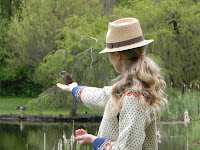 Eliza feeds the hungry nesting mothers. We saw a few fledgling Red-Winged Blackbirds in the reeds near the bridge. We left a handful of seeds on the railing for them. It must really work up an appetite learning how to fly, and teaching someone to fly. Why are baby birds almost twice the size of their parents? Can you imagine if that were true fro everything that hatched out of an egg? Giant Eagles, turtles & alligators... 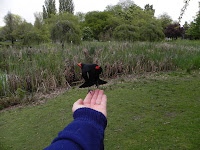 So we ran out of seeds and I have another errand added to my day. Once you start feeding a few birds, they seem to really make a point of letting you know that you now have a new responsibility. I learned to keep a balance with Bawckey, my backyard wild crow pet. Our pets are on the raw food diet, and I was giving Bawckey the leftover cat food - because it was too expensive to waste and not to name names, but Pippi (our cat) is Picki. Anyways, I would set out the cat dish and this one crow would eat it. I went away for a few weeks and when I came back, Sparrow (my dog) & I were on our way to the coffee shop, he swooped down and scolded both of us. So now he only gets fed occasionally. I save those leftovers and then every once and a while I feed him, like once a week or twice. But the bird feeders on the other hand feed a lot of different guys, so we try to keep that full. And the suet paddles are there for the Northern Flickers, and monopolized by the Starlings - who happen to be Jill's faves. 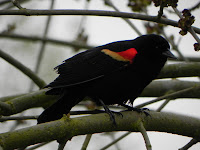 I just have a thing for the Red-Winged Blackbirds right now though. The day Eliza fed her first one, I told my mom about it and she mentioned hearing something about them in the news that day. Turns out that this particular bird has a strange phenomenon surrounding it. One that worries me and gets my head thinking about the conspiracy to hide the real facts about why, thousands of these birds spontaneously fell from the sky, more than once. Fireworks? I doubt it. And this isn't the first time it has happened... I am glad our friends at the Cove are safe for now. I shudder when I think that this happens to be located on some pretty valuable real estate. Our country is not as protected as we all like to think. Our National Parks are in jeopardy, they are over used and under funded. No one should ever have to fight to protect nature, it should be protected naturally.
If no one wants corporations polluting our water and our precious ecosystems, how do they continue to do it? I personally want to try to stop all of this planet raping from continuing in my neck of the woods. I was part of an International Greenpeace demonstration a few years ago, well more than a few now - but groups of us all over the planet were trying to get corporations to listen by just collectively boycotting one company and showing them all that we had the power and wherewithal to pull it off. A group of us simultaneously walked onto ESSO gas bars and chained ourselves to the pumps and asked folks to buy their gas somewhere else. It was the first time I had participated in something that would certainly lead to my arrest. It was an interesting study in human behavior. We were calm and peaceful, but many of the customers got really defensive. A lot of them were shouting that the climate crisis threat was all a bunch of crap made up by tree huggers like Greenpeace. It's so funny how someone can shout something at you and actually think it's insulting, "TREEHUGGER!" Anyways, I was arrested and thrown in the slammer. But that's another story. 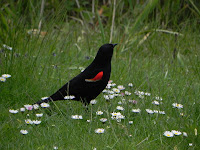 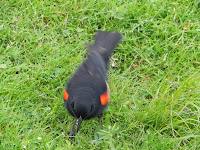 Now to find out what died/is dead in the backseat of Jill's car... Have a nice day, if you are so inclined.
Posted by Firedog at 10:29 AM