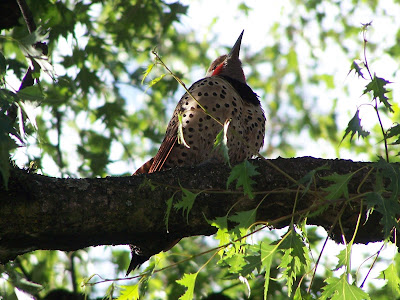 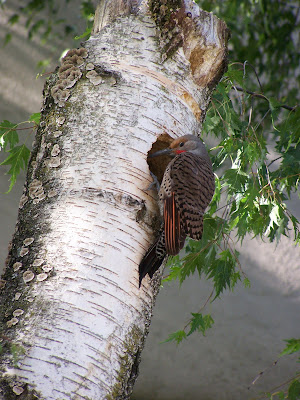 The birch tree now has foliage, but it was bare when all this started. The flickers are very busy in the nest across the street. I am certain they are sitting on eggs, there is always someone in the cavity. They feed on our suet paddles at each shift change. They seem to take turns about every 3 hours roughly.
They have a definite habitual pattern to their day, and rain or shine they are shift changing and rotating. One thing I can't clearly make out is whether or not the two females are in rotation together or if he works both nests. I will see if there are two females there at once, but if they alternate between the male, I have no real way of differentiating.
When I was younger, my mom -spiritual teacher that she is- gave me a book written by Anne Cameron, called Daughters of Copperwoman. It's special book to say the least, with a lot of ponderable goodness throughout.
Like, "The only surviving census came from memorizers of the warrior society; from their perspective, a man had multiple wives, whereas the woman memorizor's view was that several women shared one husband." It's more than just a respect/ownership thing. Less about power, more about survival. I wonder how the Flickers feel. Does he have 2 wives, or do the females share one husband? because it looks like the females share one husband. Most of the mating ritual was between the females. 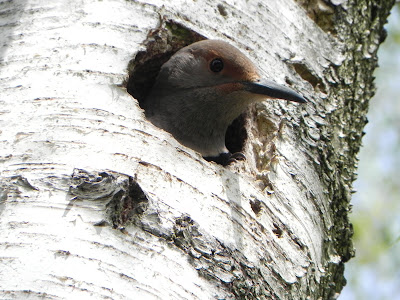 They danced through the branches of the birch tree tirelessly for weeks. He only came to watch their display during this time, there was no mating. That started after the dance between the females.
I haven't had time to thoroughly discover where the second nest is. It's close and down the back alley, but there are a few cavity nests in the hydro poles and I haven't seen any traffic to or from any of them yet. But I know there is one, because those eggs were taken with deliberate speed and to the same place each trip - not random drop sights. After the eggs were moved, there was another round of mating, my guess is to the second wife. And I think the second wife is in this tree.
What makes all this even more interesting, is that this egg moving business is a totally brand new discovery. No one has seen it, made any record of it, and we have video! 2 videos, actually. 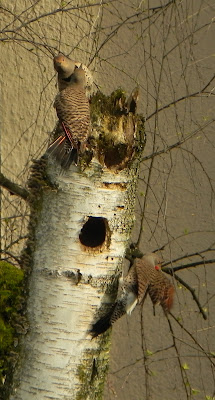 When they were mating, the females bobbed their heads and flitted with each other around the birch for more than a week. If they were in between dances, they would rest together on the same limb. They would fly off together darting through the trees and around the rooftops. They would circle around their nest and the other one a block away and then fly back, both landing high in the bare tree, screaming for the male to come quickly, which he always did.
These days there is only some chatter in the wee morning hours, like around 5:15 AM. The it's all quiet, except for the changing of the guard... The shift changes go like this: She flies up and lands near the nest. He pokes his head out and sees her. He flies out and to either the roof or the suet paddle. She immediately lands on the nest entry-hole and hangs there a second before going inside. They know the Starling had been in and out of there during their mating dances. Now there's no chance for that to happen, because there is always someone in it or on the cavity hole! 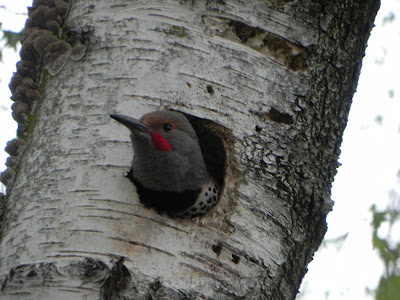 After the shift change, she sits for about an hour and then he returns. She knows he is coming about a minute or two before he gets to the tree, so he must call and I just can't hear it - or they have a tight agreement.
He lands in the top of the tree and waits, her head poked out of the hole. He makes his way down to the cavity, limb by limb hopping down to her. He hangs on the hole as her head is poked out and then she flies away, always to the roof or the suet paddle, then to the other nest or yet one more location they come from across the street and south a block. 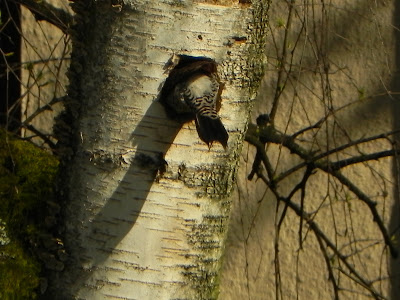 This is the female going into the nest. This is actually immediately after the second time they mated. She hangs outside on the cavity entry after mating, and those fluffy white feathers are all exposed, I like to make comments to Eliza like, look who has her knickers down again...
I am choked that I am still having trouble loading the videos onto this blog. I have been trying all day again and it always fails...
I love my desktop, but I worry her days are numbered... please hold out until afford to replace you, sweet eve. That's what I call my computer. And I called her that WAY before Wall-E. I called her that because she , eve, my Mac, is the mother of all creation. Which has nothing to do with evolution and everything to do with art... 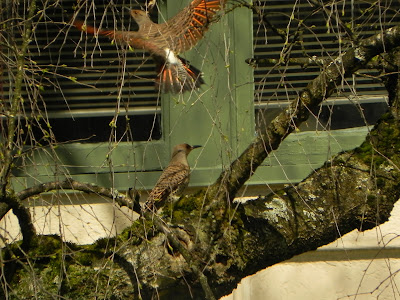