Jerry's Cove- Where's that at? 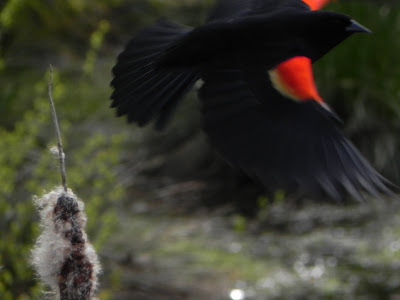 I love Canada. That's why I recently voted against the 'person responsible' for running my country right now. (That's in quotes, because I am not sure if he's actually human, and quite sure he is irresponsible.) I worship nature. I am inspired by it, and in awe of it. In Canadian nature, anyone can easily find beauty in it practically everywhere you look, without even trying. But like a lot of other places on the planet, Corporations are really compromising the natural state of everything and I am not sure that my elected officials are doing enough to protect this beautiful country, or planet.
Maybe you heard about it maybe not - but there is a catastrophic oil spill going on in Alberta. In April a major pipeline broke and made a huge industrial disaster. The company responsible 'apologized' & A$$hole running our country put a media gag on it until after the election. So as not to rile the constituants, and because he is down and dirty with off-shore drilling and digging deep to suck our planet dry for personal profit. An oil slick, right smack dab in the middle of wilderness, in a precious marsh, and in the middle of breeding time. Clean-up is not happening as fast as the locals who do worship their land need it to be happening. I won't go into a huge rant about the TAR SANDS, I am attempting to keep this light hearted - but I also want to be informative. Any words you see in my blog that are coloured differently than the usual text can be CLICKED on for further detail...
Now back to today: 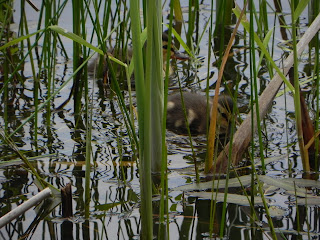 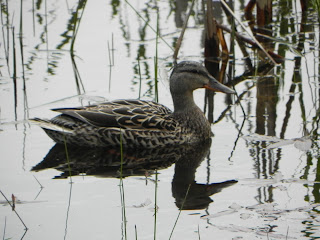 Today was yet another day we loaded the dogs into Jill's car and went to Jerry's Cove, commonly known as Jericho Beach. This is the place where everyone in my family loves to come. The dogs can run, Sparrow can chase sticks, Hawksley is off leash most of the time, unless we see a Bald Eagle, then he's on leash. We come here a lot, it's glorious. There's a huge duck pond with a beaver family living in it and building dams all over the place. And right now, it's baby bird time!
You can go here and walk right past the ponds to the beach and spend your time looking at the water or walking the shores, that's what I've been doing for the past 19 years, anyway. Tossing tennis balls or sticks for Alice or- now for Sparrow. Or you can come during Folk Fest and not even recognize the place because of the stages, and food booths, and throngs of people/folk.
It is just recently that I have actually gone out of my way to see birds and watch and photograph them. Much to Sparrow's chagrin, the distraction from me playing with him is not something he is impressed by. I have always noticed birds - of course and watched them or whatever, but now we go specifically to watch the habits of the birds around the pond and get some good pictures. This is all because of Mr. & Mrs. & Mrs Flicker across the street probably. They demanded my attention and my camera, then it became like a challenge to get a decent shot of the birds I see. Then one day at Jericho a Red-Winged Blackbird landed on Eliza's hand and started eating seeds! 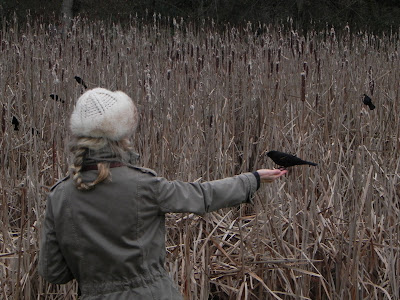 She walked up to the edge of the pond and held out her hand and this male RWBB just landed right on her fingers. He had followed her from back near the little wooden bridge and sung a few songs at her. She had the feeling he would eat from her hand, and so she tried - he didn't hesitate a second. We returned to this spot for few days taking their photos, attempting to feed them again. Might have been more successful without the truffling Pug & Frisbie focused Border Collie...
I got some nice shots though. Months later I was there alone and a female landed on my hand and had a few seeds. Her little feet were cold and soft, she held on tight to my thumb and forefinger and ate some seeds for about forty-five seconds before flying off into the rushes. They are delightful.
Today, we saw so many different birds. It was noisy with birds. Probably because we haven't seen the sun the way we should be so they are taking advantage of the warm light and getting out of the nest. We were particularly lucky to see a Belted Kingfisher! He was hunting, and first caught my eye when he plunged into the water and emerged with a giant frog in his beak. He darted out of the water and up into the Willow hanging over the water and quickly swallowed the entire morsel of whoever that was.
Eliza stayed back with the dogs an dI wandered up slowly. He was too busy hunting to even care about me taking his photo. I took these pictures, and left him to hunt. We watched a crow chase him back and forth across the pond a few times and then he took off fast. The crow thought he won that battle, but the Kingfisher came all the way around the forest a few minutes later and started hunting from the Willow all over again. 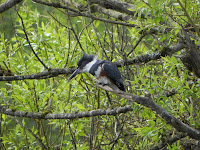 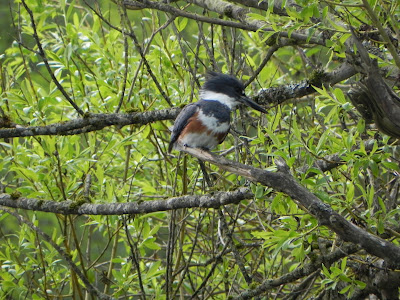 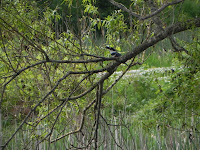 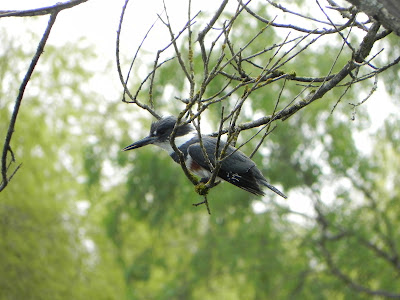 This day at Jerry's Cove was just another day at the beach for us. How lucky are we? Lucky enough to know I have to pay attention to nature, and what my impact is on it. I want to be able to continue to have these days. Even after the catastrophe in Japan. So for all these beautiful birds that need clean water, I say NO to off-shore drilling, and NO to endless consumption of fossil fuel. We have the capacity to make great change. Let's just get at it already... start by going out into nature. See all that you have to lose.
Posted by Firedog at 3:07 PM