Vancouver ÷ all other birds = Crows

If you live in Vancouver long enough you'll come to notice a common theme among artists of any kind. I have never seen one specific common denominator like this before and when you do notice it, it's like a phenomenon. In paintings, sculptures, photography, on purses, t-shirts patches and tea towels, tattooed on bodies... the subject writings from songs & short stories to Fringe plays;

Crows. And it's not a mystery as to why. Here in Vancouver, each night at dusk, the sky is full of them. Millions of them, well hundreds of thousands at the very least. Murder after murder traveling east to a common roost just outside the city in Burnaby. They start just before the sun begins to set. Just a few at first. Then from a good vantage point, you can see them appear. Each one starting as a mere pin prick sized ink spot against the sunset until they pass over head twenty or even a hundred at a time cawing and flapping home for the night.

Personally I have always loved loud, cheeky, black crows. Ravens too, of course but I don't see those guys as often in the city. When I lived off the drive a baby crow fell out of the cedar tree on the front lawn. We lived in a huge house with about 10 suites and about 23 cats... so naturally, at least naturally for me, I tried to save it. My neighbour Pascal even tried to climb the poor little guy back up and set him back in. She had to have climbed up about 75 feet into that cedar - in less than 2 minutes I might add on an impressed note - but the nest was out on a limb too far for her to reach to put him in safely. 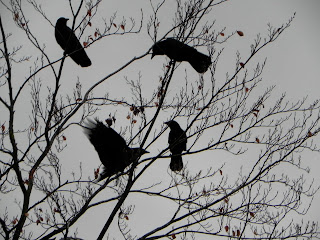 He looked almost old enough to fledge, so I decided to put him in Jill's empty apartment across that I had keys to because I was painting it. I got a little crate and fed him with an eye dropper fro a few days. The mother crow would swoop down and tap me on the head with her feet as I left the Chateau Gil where he was staying, and went back to my home in Charlesbury Manor. Sadly, this little crow didn't make it. Sadly because I would have loved a pet crow - or loved to have released him after he got older. My reasonable friend at the time told me the mother pushed him out because there was something wrong with him in the first place... Anyway - that isn't where I was going with this today.

It's about Bawlckey. Bawlckey is a charming crow that lives on my block during the day, and flies with ALL the rest of them to Burnaby at night. I like to think he is about 5 years old and has a sister and a mother and a father and 3 cousins that visit his zone regularly. Zone meaning I think all the crows have a regular zone that they go to each day and then like a well trained military they find treasures and secure locals and report back to the boss and such. They seem pretty organized to me, anyways. 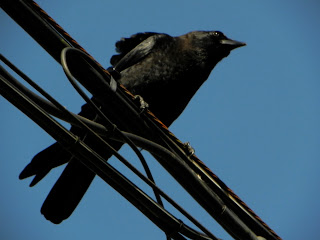 So Bawlckey first started thinking I was pretty great because we have two picky cats on a raw food diet and I hate waste, so we formed a symbiotic relationship. If I threw the untouched raw chicken, or beef, or salmon into our garbage, it would stink up the house or outdoor garbage within hours. Also, it was a real waste of not just money, but more importantly, something died for that meal and the cats would often not feel like eating, or whatever- and the food would just sit there to the point that it should be dealt with, i.e. thrown out - wasted.

Bawlckey was the happy answer! One cold rainy day, he "BAWLCKED!" at me and I was emptying the cat dishes, so I opened the screen door and tossed a clump onto the lawn. He didn't hesitate to swoop down and investigate. He apparently found it suitable and took it to the vacancy sign on Steve;s lawn and ate it. I had more left, but after only one clump, he flew off. I set the cat dish down on the counter and proceeded to clean the kitchen. After about 10 minutes, I hear, BAWLCK!BAWLCK!BAWLCK! so I look out, and there is Bawlckey, on that same certain branch, shouting at me to bring out the dish of food! So I go out and toss a chunk, and out of no where, crows began to descend onto the lawn. 7 of them in total. I fed them each a morsel of meat and found a few other things to toss out to them. Everything I eat is organic, and most of it local so there are safe things I can toss out for them on days where I know they are hungry.

Anyway, by rights, I should have done my first blog about Bawlckey because he is the first wild bird I have had a real long-term relationship with, one I will take great pleasure in describing from time to time, because he is quite a character. For instance, he follows us on our dog walks and swoops down and taunts my border collie Sparrow all the time. Deliberately. He is so bossy. 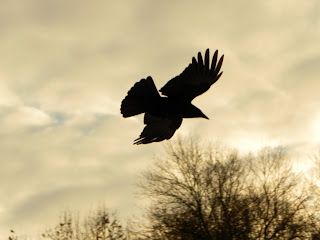 I have this thing that I do, at first it was just to make Eliza laugh, but now I do it because I think it's hilarious. No matter where I am, Vancouver, Toronto, the island, whenever I see a crow, I say to that crow, "What are you doing here Bawlckey?!" Like he's the same guy everywhere I go. It's like you have your own magical crow following you around with out the tricky logistics of that really happening...
Posted by Firedog at 6:38 AM