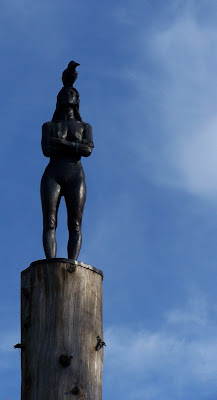 As I mentioned in a previous post, Vancouver artists often use crows as subjects in their work. I forgot that I did too, I mean not just in my photography... Years ago, 3 friends & I made a short film for the Vancouver 24hour Film Contest, called PONTYSOUP. It's a silent film over music selected by the contest that we had to incorporate it into our movie. The only sound - a bunch of squawking crows! I had forgotten all about their cameo in our film...
I also noticed this really cool statue in North Vancouver a few months ago. The name of the statue is Out/Look and if you are interested in public art, here's a great link you can go to and look through all the installations around and about North Vancouver. The gal on the line when I called there was really helpful, so a shout out to Laurie at artsoffice.ca.
I remembered the Pontysoup crows because I loaded a video onto Youtube I wanted to post onto this blog from my iPad, but am having technical difficulties. So if you want to see the cute Red-Winged Blackbird guy at Jerry's Cove, sorry ma - but you'll have to click here. Until I finally figure it out, or Blogger doesn't take an eon to upload it. :)
Also, a little off topic - here's the cutest bird video I have seen on Youtube in a while... mainly because of the sweet commentary... it's called Amazing Bird Fishes By Himself . Honestly, the cute man narrating is just awesome, and the bird is a real schrewdy...
A few days ago Eliza and I were coming back from walking the hounds, and we heard a serious ruckus on the roof of our building. Something Seagull sounding. So I climbed up onto the roof, and here's what I saw... Gull Fight Club I know mom, another click away from my page, but I'll keep working at the problem until it uploads onto this one! 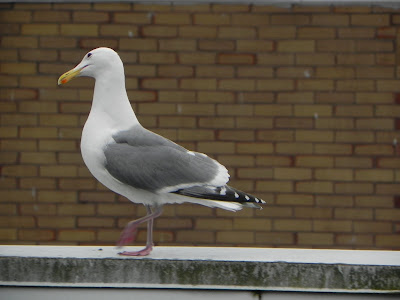 I have no idea what the Gulls were doing. The one had the other guy by the beak for so long and just stood there... The Gull in these these photos looks a little like a rare Gull I noticed in the back of my Birds Of Canada, called a Slaty-backed Gull. I have seen a few of these around, and wondered it they were in fact here from Japan because of the terrible earthquake, horrific tsunami, and now, f(*&^ing nuclear crisis. No doubt, wings are an asset there right now. 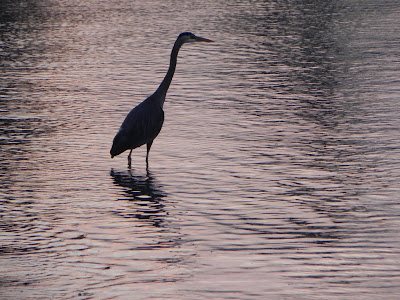 The other night we went to the beach and I got a nice video of this Great Blue Heron eating minnows or something. He caught quite a few while we watched, until a frisky yellow lab pup played chase the giant bird...
I will post a link to that if I can't post it here. This photo will have to do for now. Just imagine him dunking his head under the water and coming out with a fish! 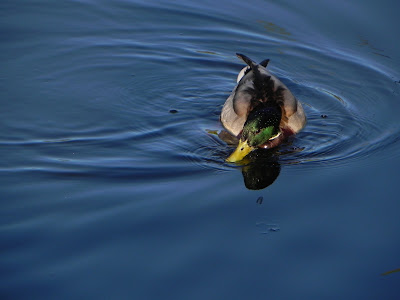 The Mallards have babies floating all over the surface of the pond and they are so cute. The moms and dads were all grooming in the last few moments of sun on the water, it was really pretty...
I hope tomorrow will be a more successful day of uploading videos...
The Ornithology Department at UBC is into my Northern Flicker video of them moving the eggs, it's a real discovery and they also like my Flicker pictures! Which is cool. It makes me sort of scientific without all the thinking and equating... or credibility...
Posted by Firedog at 11:58 AM